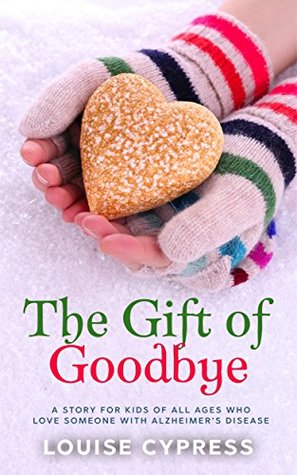 Add to your Goodreads shelf!

I received a free ARC of The Gift of Goodbye: A story for kids of all ages who love someone with Alzheimer’s Disease, by Louise Cypress, in exchange for an honest review.

Even though I try not to describe too much in detail past what is in the official description, this review may contain spoilers.

“Caleb will do anything to protect the people he loves–and his grandma is top of that list, especially now that she has Alzheimer’s disease.

The Gift of Goodbye is told from the perspectives of four children. Caleb and Tyler are twins whose grandmother suffers from Alzheimer’s. Emma is a classmate  whom suffers from dyslexia, which causes her immeasurable stress in school. Sydney, is Emma’s best friend, and will defend her best friend’s honor at all costs, even when her own home life is in shambles.

One day, Emma runs into Caleb after meeting his grandmother in a public restroom. Grams was in a state of confusion, which led to an unknowing Emma to come out of the room laughing and describes the sight to Caleb. Caleb, in his frustration and anger over Emma laughing at his grandmother, decides to embarrass Emma for her disability, which starts a battle of cartoon bullying between Sydney and Tyler.

The story rotates through each of the children, highlighting their fears, struggles, and emotions, and eventually leads to some big revelations that rock each of their worlds and also enlightens them a little as well to allow them each to grow.

When I first started to read this story, the way the story flipped perspectives took a bit of getting used to, mainly because the switches were really quick and there were times when the reader would know Emma was talking to one twin, but Emma would think it was the other. The first time this happened, I thought that the author got confused at which twin was in the scene, but then once I read the next section and realized Tyler was acting like Caleb, I went back and reread Emma’s scene and it all made sense.

One part I really enjoyed, mainly because it brought up memories of my childhood, involves the scene where the Cub Scouts’ song, “Great Big Globs of Greasy, Grimy, Gopher Guts” was mentioned and I found myself smiling. That was a song that my dad taught my sister and I when we were little, and he also taught it to all of his friends’ kids as well (much to their parents’ displeasure). It was always a fun song to sing together. Now that we’re adults, we will sometimes find ourselves singing it around the table randomly. So, that was a scene that the author probably didn’t mean anything with, but it really made the story connect to me a little better, because even though I knew it was a Cub Scouts’ song, I’ve never known anyone outside of my family and our friends who have even heard that song.

I have had relatives in my extended family with Alzheimer’s and dementia, but I wasn’t around those relatives during those periods due to living a great distance away. But, I have watched shows, read books, and talked to people, and I have gotten a picture of how Alzheimer’s affects a person’s family. It’s terrifying to think that one day, a loved one is so alive and present, and the next day, they are a shell of who they used to be. I pray that never happens to one of my loved ones, and I pray for a cure for those who are currently affected.

I felt The Gift of Goodbye was a very heartfelt story that touched on how not only how Alzheimer’s affects lives, but other topics such as dyslexia, bullying, death, and child/parent relationships. This story was very relevant and was well written.

I give The Gift of Goodbye 4 stars.

View all posts by amachelle

Follow Rainy Days, Books, and a Cup of Coffee on WordPress.com